Nautilus elementary is a fork of Nautilus File Manager which claims to patched for simplicity. It now has a toolbar editor and you can easily add pencil icon to your toolbar using this feature.

It is currently available for Karmic and Lucid. To install it, open up Synaptic Package Manager (Alt+F2>gksu synaptic) and navigate to Settings>Repositories>Other Software and Add ppa:am-monkeyd/nautilus-elementary-ppa. If you are using Maverick, it is not available now, but you can use the Lucid PPA just by editing the entry (after adding, select it and choose Edit) and it should work fine. Now, close the dialogs and Reload in Synaptic. Mark All Upgrades and install it. You will need to logout and log in (or simply kill nautilus.. Alt+F2>killall nautilus) for changes to take effect. Now, to get the pencil icons or add/remove/move other toolbar elements, navigate to Edit>Customize Toolbar.

[ad#ad-1]I had posted about flash plugin controls not working in Ubuntu 9.10 Karmic Koala 64 bit here. I had moved to Ubuntu 32 bit for quite sometime and recently made a move back to Ubuntu 64 bit. I found the same problem with flash plugin controls in Ubuntu 64 bit. Sometimes it works, and sometimes it doesn’t. I haven’t found any specific patterns to when it does and when it doesn’t. If someone has, please do share.

In my previous post regarding the issue, I had suggested the installation of Adobe flash player 64 bit version from Adobe Labs website. The solution worked fine for me and it seems for most of the others, but the plugin was experimental and when someone needed to update, it was not available via repositories. It has been provided in a launchpad ppa repository currently which can be added by adding ppa:sevenmachines/ppa to Repositories in Synaptic, but it seems it is not updated as of now and the latest version available in the ppa is 10.0.45.2 while Adobe has already released version 10.1rc4. But since the latest version is not recognized by youtube, I think we should stay with the version in the repository.

Simply open up synaptic and navigate to Settings>Repositories>Other Software and click on Add. In the apt-line, enter ppa:sevenmachines/flash and close it. Then Click on the Reload button. Now, search for flashplugin64-installer, mark it for installation and click on apply.

When done, restart firefox and flash should run fine.

[ad#ad-1]I was wondering if we could downgrade from Ubuntu 10.04 Lucid Lynx Alpha to Ubuntu 9.10 Karmic Koala. So I decided to put it upon test and I succeed. So, I am sharing this with those who wish to keep using stable Karmic Koala till the final version of Lucid is out.

Please note however, that all the installed applications will be lost, however the settings and files in your home directory will be preserved. So, for example if you have a huge list of saved sites on your Filezilla client, Filezilla will be gone, but when you install Filezilla on your Karmic, the settings should work. Also, your Firefox browsing history, preferences and other settings will also be preserved. END_OF_DOCUMENT_TOKEN_TO_BE_REPLACED

[ad#ad-1]I am using globalmenu 0.7.9 (Mac OS X like Global menu for Gnome) from the globalmenu-team PPA (Karmic as Lucid is not available now) in my Ubuntu 10.04 Lucid Lynx. I get the following error on terminal when I try to launch any gtk applications from the terminal:

END_OF_DOCUMENT_TOKEN_TO_BE_REPLACED

[ad#ad-1] I am using Ubuntu 10.04 Lucid Lynx Alpha on a system with Gigabyte GA-G31M-S2L with Intel GMA 3100 onboard graphics. I upgraded to Lucid from Karmic Koala (9.10) and it was always showing these errors on boot:
“error: mountall Could not Connect to Plymouth”
“mountall main process (x) terminated with status 1”
Also, I could not experience Plymouth. I thought it was a problem with Plymouth and believed updates will fix it, but that did not happen till date. Today, I decided to fix it and went looking around for a fix and got it working.
END_OF_DOCUMENT_TOKEN_TO_BE_REPLACED

[ad#ad-1]I upgraded deluge recently to version 1.2.0 and then started it. The “Add Torrent” and several other options were greyed out and the torrents I was downloading were not there anymore. Here is how I got around the problem and how you can do it if you are facing the same.
END_OF_DOCUMENT_TOKEN_TO_BE_REPLACED

[ad#ad-1]Newmat is a matrix manipulation library for C++. It can be used with various C++ compilers.

Here we will go through how to use newmat with Code::Blocks in Ubuntu. I’m using Ubuntu 9.10 Karmic Koala with newmat 10 and Code::Blocks 8.02, however other versions may also work. Here is how you can do it. END_OF_DOCUMENT_TOKEN_TO_BE_REPLACED

[ad#ad-1]
xVideoServiceThief is a Desktop based video downloader for Linux, Windows and Mac. It is capable of downloading videos from Youtube, Google, Yahoo and various other sites. You can even queue the videos and it downloads with resume support (if the server supports it). It can resume Youtube videos. 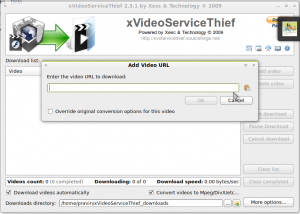 END_OF_DOCUMENT_TOKEN_TO_BE_REPLACED

[ad#ad-1]Docky is a great dock for Linux and is based on Gnome-do.

END_OF_DOCUMENT_TOKEN_TO_BE_REPLACED

[ad#ad-1]As you know, Linuxmint is based on Ubuntu. So I thought, it might be possible to take Ubuntu as a base and turn it to Linuxmint with available Linuxmint software. Thats what I did.

I used Ubuntu Karmic Koala and turned it into Linuxmint Helena. You might use other Ubuntu base and turn it to respective Linuxmint distro, but you may need to follow different (yet similar) steps. Here is how I did it. END_OF_DOCUMENT_TOKEN_TO_BE_REPLACED